Acoustic guitars are guitars that produce the sound themselves. No amplifier or other device is required to play this type of guitar. There is something magical about an acoustic instrument, the fact that you are producing the sound directly with nothing coming between you and the instrument. The advantage of the acoustic guitar is the sheer beauty of acoustically produced sound and the fact that it is self contained. In other words, you do not have to buy an amplifier and carry it around everywhere you want to play. Although it is possible to play finger-style on an electric guitar, this type of playing lends itself more to acoustic guitars and in particular the nylon string classical guitars. Some acoustic guitars do have pickups which allow you to amplify them. In combination with an amplifier this will allow you to play an acoustic guitar at higher volumes and to modify the sound using effects. However, it will still sound like an acoustic guitar, ie. if you want a heavy metal sound you can not save money by buying an acoustic with a pickup but will need a real electric guitar. The two main types of acoustic guitar are the classical guitar and the steel string guitar. 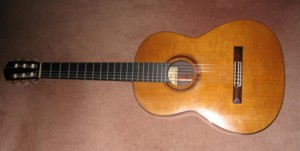 Before the 1890’s the guitar we now call the classical guitar was the only type of guitar though there were some minor variations such as the flamenco guitar. All guitars were strung with 3 treble strings (the higher sounding strings) made of animal intestine also known as gut and 3 bass strings (the lower sounding thicker strings) made of a silk core wrapped with gut. These strings were often erroneously referred to as cat gut strings but they were actually made from sheep or cow intestines not from cats. In the 1940’s partly due to shortages in gut strings because of the war, experiments were made in manufacturing strings with nylon. The nylon strings proved to be cheaper and more dependable than the gut strings and have entirely replaced gut strings on the classical guitar. Recently other synthetic materials have been used to make classical guitar strings but nylon is still the most common material for classical guitar strings. The modern classical guitar uses 3 nylon/synthetic treble strings and 3 bass strings with a nylon or synthetic core wrapped in metal. 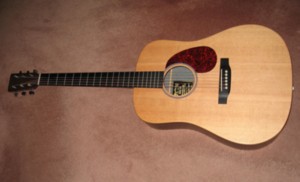 Steel string guitars began to be made in the late 19th century. The maker and exact date of the first steel string guitar is unknown but it was in the 1890’s that they began to be commonly produced. The steel string guitar was first produced in the USA and came about largely because guitarists desired more volume in order to play with the louder instruments in American popular music. The gut strings used until that time were expensive, inconsistent in quality and not very loud. Steel strings were cheaper, louder and could be produced more uniformly. The drawback though was the tone of the steel strings was less rich and beautiful and for this reason the classical guitarists never switched to steel strings, continuing to use gut strings until nylon strings were developed.

Differences in Construction Between a Classical and Steel String Guitar

The differences between the two types of guitar are not confined solely to the material of the strings. The use of a different type of string and the fact that the new guitar was going to be used almost solely for popular music necessitated some changes in the construction of the guitar. Steel strings create a lot more tension on the guitar neck and body than either the gut strings used at the time the steel string was invented or the nylon/synthetic strings of today’s classical guitars. Thus, the construction of the guitar had to be modified to support the additional tension. Further modifications were made to produce the type of sound required for the style of music to be played. Among the changes were the body was made larger, the bracing of the top inside the guitar was heavier and a steel rod was placed inside the neck. Since the primary function of this guitar was to play chords to accompany singers and other instruments, the neck was made more narrow to make changing chords faster and easier. The classical instrument is designed to produce a beautiful tone in which each note can be heard individually while steel string guitars have a louder, brighter and more twangy sound in which a uniform, homogenous sound is produced. If a chord is played on a classical guitar the ideal is to hear each note of the chord distinctly while a steel string aims to produce a more homogenous sound of the chord as a whole. 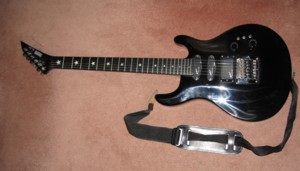 While the steel string guitar was louder than the classical guitar, the size of popular music bands also grew so guitarists continued to search for more volume. In particular, the big bands of the 1920’s and 30’s with their large brass sections made it very difficult for guitarists to be heard even with steel string guitars. With the development of electricity, microphones and amplifiers began to be produced and there were many experiments in amplifying the guitar by electronic means such as attaching microphones to it. In 1931, George Beauchamp produced a guitar that is generally considered the first true electric guitar because it employed electromagnetic pickups. These pickups are magnets that pickup the vibrations of the strings and convert them into electric signals that can be amplified. This is the same technology used by modern electric guitars to produce sound though the technology is now much more advanced than in 1931.

The sound of the electric guitar is produced by an amplifier not by the guitar itself. When played without an amplifier the electric guitar does make a sound but it is very quiet, loud enough for the player to hear if he is alone but not loud enough to play for other people. In an acoustic guitar the audible sound is produced by the wood of the guitar vibrating and making the surrounding air vibrate, in particular the air inside the cavity of the guitar body. The electric guitar, by contrast, produces sound by magnets reacting to the vibrations of the strings so a hollow body of thin wood is no longer needed. Thus, the majority of electric guitars have solid bodies and no sound-hole and use steel strings whose vibrations are easy for the magnetic pickups to sense. The body of the guitar tends to be smaller which make it ideal for playing either standing or sitting. However, because it is solid wood it is also heavier. The fact that the sound does not have to be produced acoustically allows the strings to be much thinner, set to a lower height above the neck and a lesser level of tension. These factors make electric guitar strings much easier to push down than those on acoustic guitars which can be a good thing for beginners. The 3 higher strings of an electric guitar are made from plain metal wire while the 3 lower strings are wound strings in contrast to steel string acoustics which have 2 plain metal strings and 4 wound strings.

Other Types of Guitar

The electric bass was developed in the 1930’s shortly after the development of the electric guitar. Until that point the guitar family lacked a bass instrument because low sounding strings are thick and not very loud. While there were guitars with additional low bass strings added to the regular strings, a guitar with only bass strings was not loud enough to be practical. The bass role up to that time was filled by the stand up bass which belongs to the violin family. An acoustic version of the electric bass was developed in the 1950’s but because of its low volume it usually has pickups on it so its sound can be amplified. The acoustic bass is usually used when playing with amplified acoustic guitars as its sound is more similar to the acoustic guitar. The electric bass has almost completely replaced the stand up bass in popular music but the stand up bass continues to be used in classical and jazz music.

The 12 string is the type of guitar about which there are the most misconceptions. The 12 string guitar does technically have 12 strings but they are arranged in 6 courses. A course is a set of 2 strings placed very close together in which one string is a drone string, a string designed to thicken the sound. This guitar does not have 12 strings placed at a different pitches in order to provide a very large note range (a combination of regular guitar and bass guitar for example) but instead has six sets of strings. The two strings of the set are so close together that when one places a finger on a note that one would play on a regular guitar, the other string is also held down as well. These other strings are usually thin strings and are not hard to press down. Anyone who can play a regular guitar decently can also play a 12 string. The main effect of the 12 string is that the addition of the drone strings produces a different and unique sound. The 12 string is also not used in classical guitar. Many people erroneously think that because classical guitar is the most difficult guitar style it must be played on a guitar with a lot more strings than a regular guitar. While a 12 string is no more difficult to play than a 6 string guitar for an experienced guitarist, beginners with weak fingers may find it more difficult to press the double strings than single ones so I recommend people learn on a regular 6 string guitar not a 12 string.

Unlike 12 string guitars, 7 and 8 string guitars do add to the pitch range of the guitar with lower strings. These guitars were often used by classical guitar virtuosos and composers in the later half of the 19th century such as Mertz, Regondi, Legnani and Coste. They are primarily used today by classical guitar performers who specialize in playing the music of these composers. Some players who play a lot of music transcribed from keyboard instruments use them because they prefer to have a larger note range. The drawback to these guitars is that the extra bass notes, which do sound quite nice when plucked intentionally, tend to ring sympathetically with the other strings when not wanted. There is also the expense of buying another guitar for a limited amount of repertoire and the bother of bringing two guitars to a concert if you are also playing 6 string compositions. Most guitar players do not have a 7 or 8 string guitar simply because they do not feel it is worth it when 99% of the guitar repertoire is written for 6 string guitar. Interestingly enough, electric versions of these guitars have started to become popular with heavy metal groups who like the heavy sound of the extra low strings.

This is a nylon string guitar that is used primarily in flamenco music. It is very similar to the classical guitar in design although slightly smaller, lighter and uses some different woods. The biggest difference is the sound tends to be less beautiful and more percussive and the strings are often set very low allowing the player to play fast more easily but often at the expense of string buzzing.

Next: Size, Weight and Playability of the Guitar