Materials of a Guitar

The most important material in the construction of a guitar is the wood. For lower priced guitars an important question is whether the top and the body of the guitar is made from solid wood or laminate. Solid wood means that the top, sides and back are made from single pieces of wood. Laminate is wood in which sheets of wood are layered on top of each other. Usually a thin layer of more expensive wood is placed over several layers of cheaper wood which saves money. When a guitar is played, the vibrations of the strings are transmitted to the air as sound waves through the wood of the guitar. Laminate does not vibrate as well as a single piece of wood which is why it does not produce a guitar with a beautiful sound and good volume. It is, however, much cheaper than solid wood which is why it is used in making cheap guitars. Some guitar companies try to get away with using laminate on as high a priced guitar as they can.

A guitar over $500 should be have a top, back and sides made of solid wood. A guitar over $300 should have a solid top with the back and sides made of laminate and a guitar under $300 is likely to be all laminate. However, there are many examples of guitar models using cheaper wood than should be found in their price range. The most important piece of wood on a guitar is the top. Acoustically, this is the part of the guitar that produces the sound. Whereas a guitar made completely from laminate will not have a good sound, a reasonably good sounding guitar can be made from a solid top with laminate sides and back. The sound of a solid top guitar will also improve as it is played because the wood learns to vibrate at the correct frequencies. A laminate guitar will not improve significantly with age.

How do you tell if a guitar is made from solid wood or laminate? The easiest thing to do is to ask the salesman. In a reputable store they will be honest and tell you. However, not all stores and salesmen are honest. It is easy enough to see for yourself if the top is made of solid wood or not. Looking at the top of a guitar straight on both the solid and laminate top will look similar as the laminate will also have a thin strip of good wood on top. However, looking at the edge of the sound-hole (the big hole in the middle of the guitar) will tell you if it is solid wood or not. The grain pattern of a solid top will continue through the thickness of the wood. If a grain pattern does not continue through the thickness of the wood, the top is made from laminate. It is much more difficult to tell whether the back or sides are laminate. However, you can look at the wood on the outside of the guitar and see if there are any distinguishing patterns in the wood grain and then look inside the guitar to see if the same pattern is present inside. If it is then the wood is probably solid, if the grain pattern is clearly different then it is probably laminate. The best way of finding out the materials used in a guitar is to look at the company’s website. All of the major companies have websites that describe the materials used in their guitars. While a store or salesman may think they can get away with lying, major companies can not so this information is quite dependable. Look for the word solid in the specification of the wood the guitar is made of. When the top is listed as “spruce”, for example, this can often mean laminate with a thin piece of spruce on top. If solid spruce is used most manufacturers will list it as “solid spruce” not “spruce”.

The two most common woods used for acoustic guitar tops are spruce and cedar. There is no difference in quality between the two woods so the choice is one of preference. Spruce tends to sound brighter and clearer and has what could be classed as a Germanic sound. Cedar is warmer and more direct and has a more Spanish sound. Both types of wood will improve over time but a cedar will sound closer to its mature sound at the beginning while the spruce will sound more raw and have a more dramatic improvement over time. I personally prefer the cedar sound but again this is purely a matter of taste and is often influenced by the type of guitar one learns on and/or the type that was played by the guitarist one listened to most. The choice of wood is an issue if you want a certain type of sound but at the lower price range it is a far less important issue than whether the top is solid or not.

Quality of the Wood

Instrument wood, whether cedar or spruce, is graded by its quality. Generally, wood with a straight and uniform grain (the width between the lines is the same) and no knots is considered the best for building instruments. It is particularly important that the portion of wood at the bottom of the guitar beyond the bridge (where the strings attach to the guitar) has a nice grain as this is the area that is vibrating and producing the sound.

A lower priced guitar is not going to have AAA quality wood but will hopefully still have decent wood. Most major companies do improve the quality of wood used as the price goes up. There may not be a huge difference between a $300 and $400 guitar but there should be some difference between a $300 and $500 guitar. However, do not assume that the wood on a more expensive guitar is better. Compare the wood of several guitars and if you or a friend can play, try and listen for which guitar produces a better sound. There are often huge differences in the quality of wood used by different companies even if there is little difference in price. I have seen $500 guitars with much better quality wood than a guitar from another company that was retailing at $700. The importance of this factor depends on the price of the guitar you are looking for. Most first time buyers looking to buy a basic guitar will not have to worry too much about this factor. At the $300 price range one should be satisfied by getting a solid top. Someone buying an $800 guitar will definitely want to make sure that he is getting a better quality top than on a $300 guitar.

The pickups of an electric guitar also greatly affect its sound. There are many differences in the construction of a pickup that will determine its sound such as the magnet material, the type and size of wire used and the number of times the wire is wrapped around it. These variables are very scientific in nature so most guitarists judge a pickup solely on how it sounds and don’t concern themselves with the reasons it produces its particular sound. There are, however, two types of pickups that anyone buying an electric guitar should understand, single and double-coil pickups. The first type of pickup invented was the single coil pickup and this type of pickup produces a very clear and bright sound. Unfortunately the wire in the pickup also acts as an antenna for any electronic signal in the vicinity picking up a hum from things such as lights and wiring. The hum is usually not noticeable while playing due to the signal from the guitar being much stronger than the hum but once one stops playing an audible hum is definitely noticeable. Double-coil pickups were invented to eliminate this and are essentially two pickups placed side by side and with opposite polarity so the unwanted hum signal is cancelled. For this reason double-coil pickups are also referred to as humbuckers. In addition to eliminating the hum, double-coil pickups also increase the strength of the signal and have a warmer deeper tone than single-coil pickups. Most electric guitars have 2 or 3 pickups and they may all be single or double coil pickups or a combination of the two. They will also have a switch to select which pickups are being used. It is easy to tell the difference between single and double-coil pickups because the double-coils are twice as big as single-coil pickups. Sometimes both pickups of a double-coil are visible and other times they have a covering plate. Whether one prefers the sound of single-coil or double-coil pickups is purely a matter of taste. 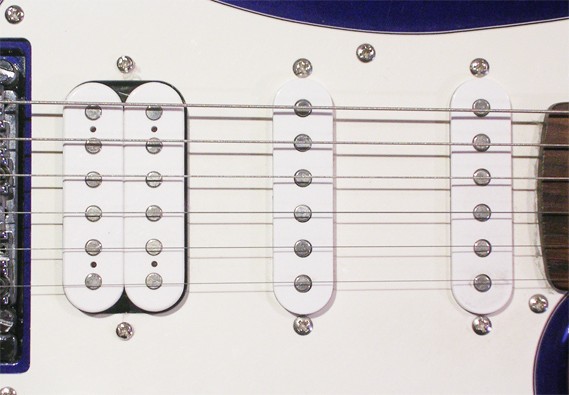 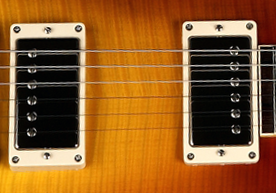